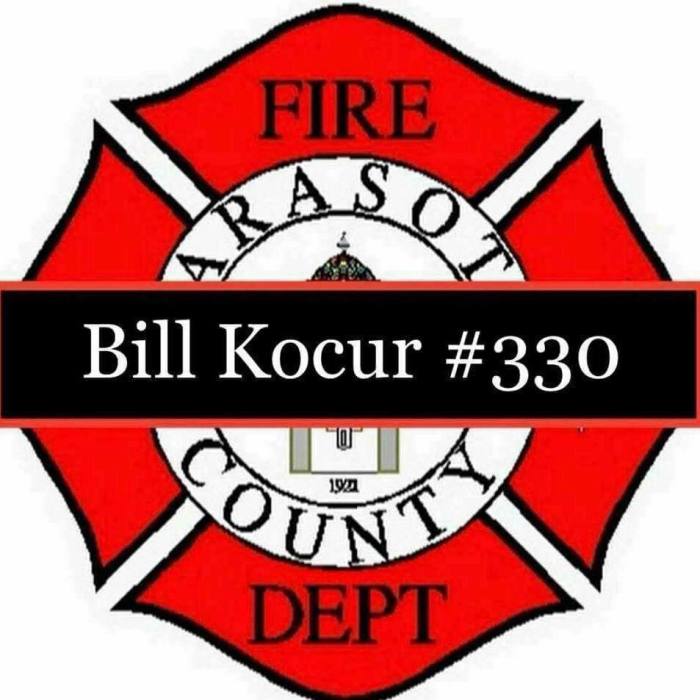 SARASOTA COUNTY — When Sarasota County Battalion Chief William “Billy” Kocur was at a fire, nothing could go wrong. He was always on top of making sure everyone knew their jobs, according to Assistant Chief and longtime friend Rod VanOrsdol. “He was a supporter of his line personnel and an extremely confident firefighter,” VanOrsdol said. “He could run a structure fire call to the nth degree of perfection.” Kocur, 63, a lifelong Sarasota resident, served the Sarasota County Fire Department for 25 years before his death this weekend in a motorcycle accident in Georgia. Kocur was visiting his family’s cabin. The cause of the accident is under investigation. Riding motorcycles was his passion, VanOrsdol explained. “It’s tough to even think about,” VanOrsdol said. “We all kind of think of ourselves as being Teflon — those kinds of things don’t happen to us. They happen to other people and we go and we take care of them.” Kocur and his wife were members of a motorcycle club and were often at events such as Thunder by the Bay. They had a son and a daughter and one grandchild. About 10 years ago, Kocur started to teach himself the bagpipes, according to his daughter Hally Kocur. “He actually got pretty good at them,” she said. “He was in great shape and very active.” Kocur enjoyed boating, as well, and he was a Mason. He was a member of the Widow’s Sons Masonic Riders Association. “He’s helped countless people,” Hally Kocur said. “He was an amazing man. He had a great sense of humor. He was a loving husband, father, a wonderful grandfather.” He was Sarasota Memorial Hospital’s New Year’s baby of 1954. Kocur first joined the Bradenton Fire Department, but in April 1992 he was hired by the Sarasota County Metro Fire Department — an agency that existed before the city and county merged. Kocur was the lieutenant at Station No. 1 beginning in 2005 and was promoted to Battalion Chief in 2013. He served as the Battalion Chief for Stations No. 3, 11, 12, 13, 14, 15, and 23. He was also heavily involved in training personnel and supervision. VanOrsdol said Kocur’s sudden death is affecting the entire Sarasota County fire service “family” as news of his death is passed along. “Twenty-five years is a pinnacle,” VanOrsdol said. “He reached that and to be that you become one of the rocks — this community lost a rock and a stable base of the fire department.” Kocur had planned to retire in March. “Everybody will miss his mustache,” he said. “The guy had the best mustache in the whole department and the smirk that went beneath it. ... That’s classic Billy Kocur.”

A celebration of Kocur’s life will be held at 2 p.m. Oct. 22 at Sahib Shrine Temple, 600 N. Beneva Road. The family has asked, in lieu of flowers or anything else, that donations be made to the Sarasota Firefighters Benevolent Fund.

To send flowers to the family in memory of William Edward Kocur, please visit our flower store.
Send a Sympathy Card