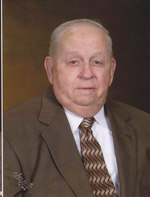 W.E. (Gene) Mitchell of Hiawassee, Georgia, formerly of Austell, Georgia, passed away November 23rd, 2011, following a period of declining health.  He was born to the late Robert T. and Chloe (Turner) Mitchell on August 4th, 1932 in Atlanta, Georgia.

Gene was a member and a deacon of McConnell Baptist Church in Hiawassee, Georgia. He was also a member of the Towns County Gideons.

Gene also had the honor of serving as Chairman of the Towns County Water Authority.

He was an active member of the Lions Club of Towns County for many years, and served as Secretary, Treasurer, President, and Director.  He also served on the Board of Directors of the Georgia Mountain Fair.

To send flowers to the family in memory of W.E. Gene Mitchell, please visit our flower store.