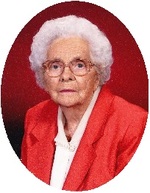 
Susie Viola Walls Dyer, age 92 of Hiawassee, GA passed away on Tuesday, October 30, 2012. She was born to the late Jess and Carrie (McFalls) Walls on June 02, 1920 in Hiawassee, GA. She was preceded in death by her husband Paul Dyer in 1981 and a son Willard â€œCubâ€ Dyer. She is survived by daughters, Virginia Palmer, Viola Waldroup and Willene Haigler, all of Hiawassee, GA; sons William Dyer and Willis Dyer, both of Hiawassee, GA; sister Lassie Sluder, of Hiawassee, GA; nine grandchildren, ten great grandchildren and one great-great grandchild.
Being one of the oldest of eight children, Susie learned to take charge at an early age. She truly was the matriarch of her family, dispensing wisdom and sharing her fait with her six children, nine grandchildren and her great-great grandson.
If Susie was missing, the first place you would look would be one of her many gardens, or in a berry patch. She could outwork her teenage grandchildren, hoeing rows of corn, beans and okra in her garden, filling berry buckets by the gallons and climbing apple trees to get all the fruit. She planted by the signs, meticulously following the almanac that she purchased at the Bank of Hiawassee every January. Her can house was filled with quart jars of white half runner beans, pickled beets, pickled corn, apple jelly, blackberry jam, fox grape jelly, sauerkraut, and endless other fine Appalachian foods. Susie would find a way to pickle just about anything! She won blue ribbons at the Georgia Mountain Fair for decades with her table display of canned food.
She met and courted her future husband, Paul Dyer, at church. She said he was the only one her age with a truck, but that was not the reason she married him! Together they grew a viable business of selling chickens for market. They began the first commercial trout farm in Georgia. Today, Dyerâ€™s Trout Farm supplies dressed and filleted rainbow trout to numerous restaurants in North Georgia and the Atlanta area.
After Paulâ€™s death, Susie worked less, and began to travel. She visited most every state in the Union, including Alaska and Hawaii. She traveled to Europe-Switzerland, Italy and France, and noted that French food just didnâ€™t taste like our food. She traveled to China and was amazed at the mass of people in the cities riding bicycles. She visited one of her granddaughters whom lives in Australia. She did not understand why those Australians did not â€œget water to that desert and grow some cornâ€. She related to New Zealand, with the beautiful farms, commenting that their farms were so pretty because â€œthey just didnâ€™t have the weeds that we have.â€
Susie was a member of Mount Zion Baptist Church and the Order of the Eastern Star Lodge. She instilled in others a love for the land, gardening and church. She cooked incredible meals! Everyone looked for her cakes, biscuits, and sweet potato pie at church dinners. She gave generously of her homegrown vegetables and home cooked meals. She was concerned about her neighbors-if they had enough to eat or had adequate shelter. Her kindness, strong Appalachian values and virtues will live on with her family and friends. Funeral services will be held on Friday, November 02, 2012 at 2:00 PM from Mt. Zion Baptist Church with Rev. Anthony Dye and Rev. Jimmy Rogers  officiating. Music was provided by Bobby Taylor, Frieda Nicholson and Jane Henson. Pallbearers were: Shane Woodruff, Jessie Woodruff, Douglas Haigler, Jimmy Sutton, Jason Dyer, Will DeVries, Nicolas Dyer and James Woodruff. Honorary pallbearers were members of the Order of the Eastern Star and the Mt. Zion Baptist Church.  Banister Funeral Home of Hiawassee in charge of arrangements.

To send flowers to the family in memory of Susie Viola Dyer, please visit our flower store.