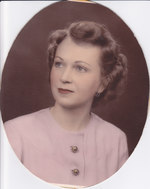 SUBJECT: OBIT FOR: MRS. RUTH LANE
Ruth Harrison Lane passed away on Tuesday, November 22, 2011 at her home in Hiawassee, GA. She was born October 18, 1925 on a farm near Walterboro, SC., the daughter of the late Clifton and Hattie Valentine Harrison. She was educated in business and worked in Savannah, GA for the Southeastern Shipbuilding Corporation during World War II. She was chosen from her department to christen one of the Liberty Ships, the â€œSS Frank P. Walshâ€ on August 28, 1944. During World War II she lived in Savannah, GA while working for three years with her future husbands parents and his sister. He was overseas and even though they corresponded, they did not meet until he returned home on a hospital ship right after V-E Day. It was love at first sight. She is survived by her husband, Calvin G. Lane after 66 years of marriage, two children, C. Gerald Lane (Jerry) and Linda Lane Watson; four grandchildren, Collin H. Lane, Lauren K. Lane, Lane Watson Briscoe and Lance C. Watson; step-grandson, Grainger Shelley; son-in-law, Leon C. Watson, daughter-in-law, Deborah M. Lane; and six great grandchildren. Her love of genealogy caused her to become a Civil War buff. Her Great Grandfather, disappeared in the Spring of 1865 while fighting North Carolina with the 1st S.C. artillery under Colonel Rhett. It was thought he was killed in action during the battle of Averasboro, NC, March 16, 1865. While going through his records at the  SC Archives, she discovered he was captured/and died in Point Lookout Union Prison in Maryland. His wife and family died not knowing what happened to him. Ruth became a member of the Point Lookout Prisoner of War Organization. She was a member of Hiawassee United Methodist Church, the St. Bartholomew Genealogical Society in Colleton County, SC and The Friends of the S.C. Archives and History Center. Family and friends meant everything to her. There will be a private family service at her homeplace in Colleton County, SC at a later date. She wanted everyone to know that â€œshe did it her wayâ€. The family wishes to thank Regency Hospice and the many kind angels who sat with her over the last few weeks. Memorials may be made to: The Old St. Bartholmew Chapter of the SC Genealogical Society, 418 Wichman St., Walterboro, SC 29488 or to Regency Hospice, Hiawassee, GA. Banister Funeral Home in charge of arrangements.

To send flowers to the family in memory of Ruth H. Lane, please visit our flower store.
Send a Sympathy Card