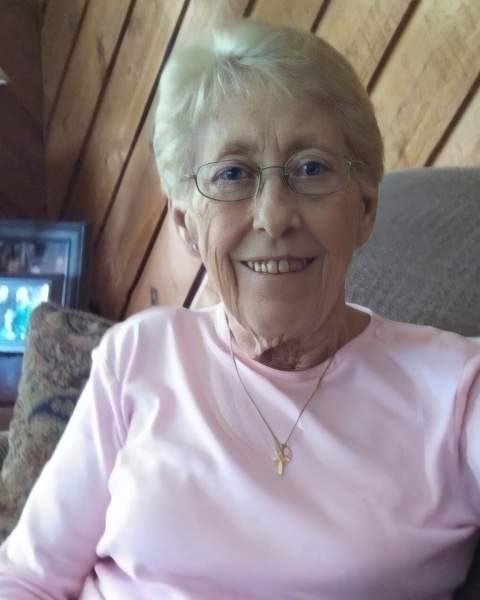 Rosemary “Rosie” Canaday, 81, of Hiawassee, Georgia went on to be with the Lord on Tuesday, September 13, 2022 in the home she and her late husband, Robert “Bob” Canaday built in 1985 in the small community of Possum Holler. She was born May 21, 1941 in Newfane, NY to William and Rosemary (Gardner) Lewis and grew up in Sarasota, Florida, attending Sarasota High School until marrying Bob in 1959, to whom she was lovingly devoted to for more than 60 years until his passing in 2019. A loving wife, mother and grandmother first and foremost, Rosemary also held many jobs over the years to include most recently working at The Pastures Convenience Store in Hiawassee, Georgia and Parkers Convenience Store in Hayesville, NC where she interacted with many members of the local community as a cashier. Though small in stature, Rosie was full of life, spunky and as some who met her said, a firecracker. She enjoyed dancing as well as singing to music and was known to ‘jitter bug’ with her sisters at family gatherings. While living in Hiawassee, she faithfully attended the Log Cabin on Saturday nights where she enjoyed bluegrass, country, and gospel music and dancing. She was also a talented painter and gifted her family with many paintings throughout the years. Aside from music and painting, Rosemary also had a deep love for animals. She and Bob had several cats and dogs over the years and also owned a horse, Pen, named after JD Penland, who generously gave him to her. The Penland family were close friends to Bob and Rosemary.
Rosemary was preceded in death by her parents; her husband; her sisters Nancy French, Ella Jean Maltby, an infant sister Alice Marie; two brothers Clinton and James Lewis; and her son Robert “Rob” Canaday. Surviving are one sister, Kathleen Hankins of Hollywood, Florida, one brother-in-law, John "Jack” Canaday and his wife, Betty of Brooksville, Florida; one son William “Bill” Canaday of Sunset, South Carolina, one daughter, Angela Owenby and her husband, Bobby, of Andrews, North Carolina, and one daughter-in-law, Kathy Canaday of Sarasota Florida. Also surviving are eight grandchildren: Billy Canaday and his wife Jessica of Dublin, Georgia; Brian Canaday and his wife, Whitney, of Bradenton, Florida; Tara and Taylor Canaday, both of Portland, Maine; Amy Abraham and her husband, Jeffery, of Chickamauga, Georgia; Clinton Canaday and his wife, Linda, of Sarasota, Florida; Shaun Owenby and his fiancé Lauren Hedenschoug of Fort Walton Beach, Florida; Bobbilyn Sisum and her husband, Jake, of Crossville, Tennessee. She was also blessed by fifteen great-grandchildren: Katlyn Sikes; Autumn and Lilly Canaday; Bowen and Wade Canaday; Lexi Inglis; Cheyenne and Wyatt Abraham; Blayne and Blaire Canaday; Laura, Mark, and Luke Owenby; Vera Mae and Coralyn Sisum; and four great-great grandchildren: Aerolynn, Aspen, Andi, and Atlee Sikes, as well as numerous nieces and nephews.
A visitation and funeral service will be held at Banister-Cooper Funeral Home in Hiawassee, Georgia on Saturday, November 12, 2022. The family will receive friends from 11AM-12PM followed immediately by service officiated by Pastor David Feathers. In lieu of flowers, the family requests donations be made in her memory to Regency SouthernCare Hospice of Hiawassee and also expresses sincere thanks to all staff members especially, Chris and Theresa, for exceptional care and support in the final weeks of Rosemary’s life.
Banister-Cooper Funeral Home is in charge of the arrangements.

To send flowers to the family in memory of Rosemary Canaday, please visit our flower store.