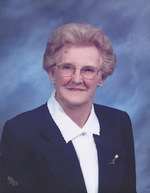 Mrs. Reba Lou Garrison, age 85 of Hiawassee, GA passed away on Saturday, June 05, 2010 following a period of declining health. She was preceded in death by three brothers and two sisters. She was born to the late Newton and Kate (Mauldin) Osborn on March 20, 1925 in Hiawassee, GA. She is survived by her daughter and son-in-law, Jane and Johnny Westmoreland, of Helen, GA; sons, Curtis Garrison, Thomas Garrison and Odell Garrison, all of Hiawassee, GA; brother, Walter Osborn, of Hiawassee, GA; sisters, Orine Kimsey and Ellen Holcomb, both of Hiawassee, GA; eight grandchildren, ten great grandchildren and a number of nieces and nephews also survive. The family will receive friends on Monday, June 07, 2010 from 5-9PM from the chapel of Banister Funeral Home. Funeral services will be held on Tuesday, June 08, 2010 at 11:00AM from Macedonia Baptist Church with Rev. Harold Ledford and Rev,Mike Wilkes officiating. Music was provided by Stanley and Karen Wood. Pallbearers were: Wayde Nicholson, Johnny Westmoreland, Elgin Westmoreland, Gary Poteat, Odell Garrison and Curtis Garrison. Interment was in Osborn cemetery. Banister Funeral Home of Hiawassee in charge of arrangements.

To send flowers to the family in memory of Reba L Garrison, please visit our flower store.