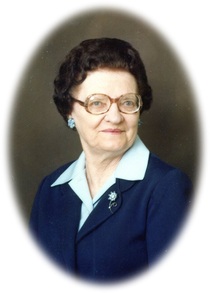 Mrs. Nannie Rose (Burrell) Sims Tatham, age 100, of Sims Circle in Hiawassee, Georgia passed away on October 13, 2014 following a brief illness.  Nannie Rose was married to the late Ray Sims of Hiawassee and, following his death, to the late Glen Tatham of Young Harris.  She was the daughter of the late Fred and Addie (Eller) Burrell, and the sister of deceased siblings, Lorayne Puckett Berry, Leon Burrell, and Jack Burrell.  Nannie Rose was preceded in death by her youngest son, Dale Sims, and is survived by her oldest son, Colonel Bruce Sims, and only daughter, Camilla Hogsed, of Hiawassee.

Nannie Rose is survived by five grandchildren: Jackie (Hogsed) Brewer, Dr. Janet (Hogsed) Oliva, Rayette (Hogsed) Ross, Colonel Alan Sims, and Betsy (Sims) Parker.  She is also survived by eight great grandchildren and one great, great grandchild.  She was the beloved aunt to numerous nieces and nephews, and mother-in-law to the late Jerry Simsâ€”wife of Bruce Sims, France Hogsedâ€”husband of Camilla Hogsed, and Beth Simsâ€”wife of the late Dale Sims.

Nannie Rose leaves behind her loving church family, McConnell Memorial Baptist Church, and a host of friends and neighbors.  She dearly loved the Lord, and will be remembered as a kind woman who never spoke a harmful word about any person.  She loved life and took great joy in every day.

Family will receive friends at Banister Funeral Home on Tuesday, October 14, 2014 from 6:00 p.m. to 8:00 p.m.  Funeral services will be held at McConnell Baptist Church on Wednesday, October 15, 2014 at 2:00 p.m.  Officiating will be Senior Pastor Steven Taylor of McConnell Baptist Church and Reverend Danny Burch of Hiawassee.  Music will be provided by The Cheerful Sounds and pianist Wayne Hundley, and pallbearers will include Derek Chastain, Albert Jones, Richard Hanks, Charles Nicholson, Doug Nicholson,Richard Parkman and Ralph Turner.

Banister Funeral Home in charge of arrangements.
To send flowers to the family in memory of Nannie Rose Sims-Tatham, please visit our flower store.
Send a Sympathy Card