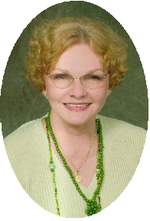 Margaret Kathryn Harkins Patterson, age 74, slipped away from us peacefully on September 03, 2012. She was the only daughter born to the late General Pat and Maver Clarenda (Nix) Harkins, of Blairsville, GA, on August 03, 1938 in Greeley, CO. She was preceded in death by a son, Jeffrey Lee Patterson in May of 2012. She is survived by her brothers and sisters-in-law, Jim (Leanora) Harkins, of Fort Walton Beach, FL; Gerry (Diane) Harkins, of McDonough, GA.  She brought into the world five loving children, Jeffrey Patterson (deceased), Jamie Patterson Clayton (Gary) of Marietta, GA; Robin (Don) Crabtree, of Leesburg, VA; Lance (Heidy) Patterson, of Columbia, MD; and Patrick Patterson, of Manassas, VA; eleven grandchildren, six great grandchildren and provided a home through the years to countless dogs, cats and wildlife. She was the matriarch of several generations and many of their friends, whom she welcomed one and all. She spent much of her career as a  Registered Nurse and was a graduate of Grady School of Nursing in 1958 in Atlanta, GA. Margaret went on to become an accomplished author and creator. She wrote and published a book for new drivers, called â€œDriving: A Rite of Passageâ€ (Amazon.com), and she regularly emailed editions of her â€œGreen Notesâ€ and â€œHealth Notesâ€. She invented both the â€œYarn Wheelâ€ and the â€œMâ€ Techniqueâ€ of crocheting, which she sold at craft fairs near her home in Warrenton, VA. Funeral services were held on Wednesday, September 05, 2012 at 2:00 PM from the chapel of Banister Funeral Home with Pastor Raburne Wilson officiating.  She is laid to rest at Choestoe Baptist Church cemetery in Blairsville, GA, beside many of her loved ones. Banister Funeral Home of Hiawassee, GA in charge of arrangements.

To send flowers to the family in memory of Margaret K. Patterson, please visit our flower store.