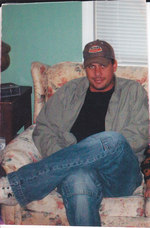 
Mr. Jason Daniel Carnes, age 37, of Young Harris, GA passed away on November 19, 2011 in Chatuge Regional Hospital. He was born to parents Earl C. and Opal (Bradshaw) Carnes on July 14, 1974 in Atlanta, GA. He worked as a fork lift operator for Freudenberg was in a band and also participated in the Martial Arts. He was preceded in death by his father, Mr. Earl C. Carnes. He is survived by his mother, Opal Carnes, of the Young Harris, GA; brother, Josh Carnes, of Warne, NC; and aunts, uncles and cousins also survive. Funeral services were held on Sunday November 27, 2011 at 2:00PM from the chapel of Banister Funeral Home with Rev. Glen Eller officiating. Banister Funeral Home of Hiawassee in charge of arrangements.

To send flowers to the family in memory of Jason Daniel Carnes, please visit our flower store.