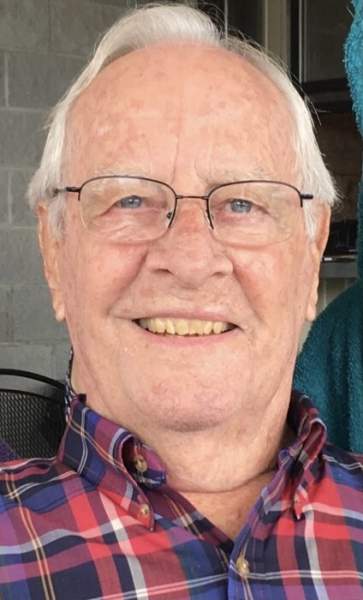 James Hood Brown (Jim) was born in Chicago, Illinois. He died at age 85 on February 22, 2021 in Hiawassee, GA. Jim lived a pretty idyllic childhood, growing up in Webster Groves, Missouri, He graduated from Vanderbilt University and eventually began selling a variety of boat lines, Johnson motors, and various accessories for fishing. For a few years, he owned a retail boat store in Jackson, MS. Boats were Jim's calling for nearly 50 years, living mostly in Florida during that time.
Jim was married three times. He and his first wife, Joan, were blessed with two daughters, Betsy and Stephanie. His second marriage to Betty gave him his beloved son, Jamie. His third marriage to Patty expanded his role as Dad and Papa, when she brought her five grown children to their union. Jim loved  having family around and adored his many grandchildren.
After his long career in the marine industry, Jim and Patty settled in Hiawassee, GA. He enjoyed sitting on the porch, looking out at the mountains and watching the birds after many years of standing at the helm of a boat, watching the waves and the dolphins.
He loved God and loved singing in the choir, both at Union Hill Methodist in Hiawassee and at Coral Ridge Presbyterian in Ft. Lauderdale. He seemed to enjoy working in the yard more than most and was the consummate grill-master for family and friends.
Jim is survived by his children Betsy Adolphe, Stephanie Knight and James Brown, Jr; and his many beloved grandchildren. Preceding him in death were Jim’s parents, Ralph and Helen, his brother Steve, and his wife Patty.
A service will be held on a date to be determined at Union Hill Methodist Church in Hiawassee, GA.

To send flowers to the family in memory of James Hood Brown, please visit our flower store.