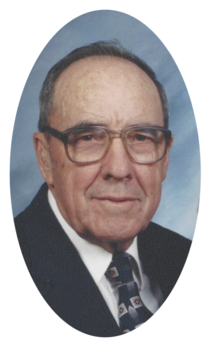 Harold Kimsey, age 90 of Hiawassee, Georgia passed away on July 11, 2015 after a period of declining health. He was born to the late Buford Marvin Kimsey and Roxie (Youngblood) Kimsey on April 13, 1925 in Hiawassee, Georgia.

Harold was a member of McConnell Memorial Baptist Church. He was a WWII veteran having served in the United States Navy. He was preceded in death by his wife, Orine Osborn Kimsey; one brother, Carl Kimsey and sister, Bessie Kimsey Arrowood.

Funeral services for Harold were held on Monday, July 13, 2015 at 10:00 AM from McConnell Memorial Baptist Church with Rev. Josh Rouse officiating. The family received friends at Banister Funeral Home on Sunday, July 12, 2015 from 6-8PM.