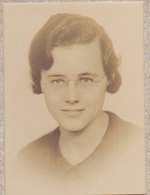 Grace Martha Douglass, age 91 of Young Harris, GA passed away on Tuesday, December 08, 2009 following a period of declining health. She was preceded in death by her husband, William Earl Douglass in 1995 and a sister, Ruth Swain. She was born to the late John Harvey and Grace Lillian (Ford) Cameron in Middlesex County, MA on April 29, 1918. She is survived by her daughter and son-in-law, Deborah and Zoran Kosovic, of Young Harris, GA; one grandchild and wife, Michael and Patricia Kosovic, of Macon, GA; one great grandson, Tomislav Kosovic and a great granddaughter, Katarina Kosovic, both of Young Harris, GA; one nephew, John Swain, of NH; one niece, Judith Huss, of NH; and a cousin, Susan Douglass, of Freedom, NH. No services are scheduled. Banister Funeral Home of Hiawassee in charge of arrangements.

To send flowers to the family in memory of Grace M Douglass, please visit our flower store.