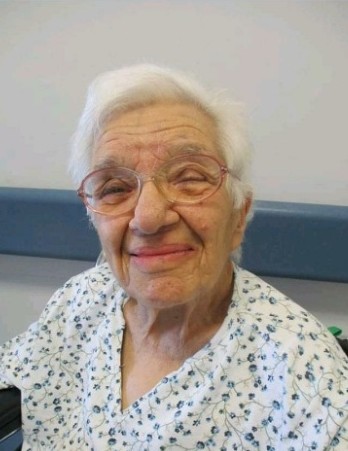 Gladys Stevens, 93, of Hiawassee, Georgia passed away peacefully on October 29, 2020 at Union General Hospital. She had been a resident of Chatuge Regional Nursing Home since January of this year. Gladys was born November 30, 1926 in Akron, Ohio to the late Paul and Julia Kish and is also preceded in death by her husband Edwin Stevens.
Gladys worked as a transport aide at Trumbull Memorial Hospital in Warren, Ohio until her retirement at age 65. She and her husband were caring and nurturing foster parents to several children over the years and loving parents to a son and daughter.
Upon her retirement Gladys moved to Florida to be near family and was also a friend and eventual caregiver to her daughter-in-laws Mother.  She moved to Georgia in 2006 with her son and daughter-in-law and lived with them until she became a resident of Chatuge Nursing Home. During her years in Georgia she was a member of the Towns County Senior Center where she enjoyed Bingo, Wii bowling and crafts. But mostly she enjoyed being with the many friends she had at the Center and even served as President for several years.
Gladys is survived by her son and daughter-in-law, Sandy and Carol Stevens of Hiawassee, daughter and son-in-law, Judy and Terry Clark of Southington, Ohio, grandchildren, Elliott Clark and Jeremy McGuire, great granddaughter, Presley McGuire and other family and friends.
Family will receive friends, November 5, 2020 from 11:00AM-2:00PM at Banister-Cooper Funeral Home, Hiawassee with service to follow at 2:00PM on November 5 in the Banister-Cooper Home chapel with Reverend J.R. Blankenship officiating. Internment will follow at Laurel Hills Garden Cemetery.

Banister-Cooper Funeral Home is in charge of arrangements.
In lieu of flowers, donations to the Towns County Senior Center would be appreciated.

To send flowers to the family in memory of Gladys Stevens, please visit our flower store.
Send a Sympathy Card