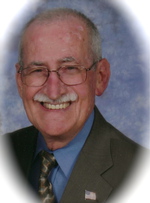 
Gerald "Jerry" Franks, beloved husband and father, passed away on July 21, 2010. He was a native of Tifton, GA, longtime Atlanta resident and spent his last ten years in Hiawassee, GA, where he touched the lives of many and leaves a legacy of faith and generosity that will never be forgotten. He is survived by his wife of 37 years, Betty Underwood Franks, his three daughters from a previous marriage Teresa Vor Keller, Beverly Rozier and Jeri Kay Beckham, their son Todd Franks and daughter Elizabeth Franks Finch and a blessed host of grandchildren, nieces, nephews, other family members, friends and church family.
Banister Funeral Home in charge of arrangements.

To send flowers to the family in memory of Gerald "Jerry" NULL Franks, please visit our flower store.