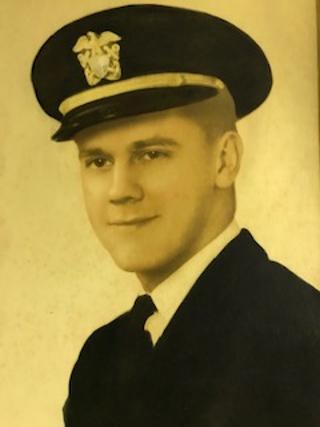 George (Bud) Robert Lederer, age 93, of Young Harris, Georgia passed away unexpectedly on Sunday, January 13, 2019 at the Ronnie Greene Heart Center in the Northeast Georgia Medical Center.  Bud was born August 12, 1925 to the late Mr. George Bauer Lederer and Muriel Adele (Rutan) Lederer in Glen Rock, New Jersey.  Bud was a member of Mountain Presbyterian Church in Blairsville, Georgia, as well as Military Officers association of America (MOAA)  He was a World War II veteran having served  for 3 1/2 yrs in the U. S. Navy as a Lieutenant aboard the USS Crescent City.  He was a mathematician and chemist with a degree in mechanical engineering, which in turn made him an accomplished businessman.  He was a loving husband and father, the glue that held his family together.  He is survived by his wife June Lederer; daughter and son-in-law, Linda and Richard Gettemy; step-daughter and son-in-law, Angela and Bob Johnson; and step-son and daughter-in-law, Joseph and Tina Devecchis. Also surviving are a number of grandchildren, great-grandchildren, and numerous friends.  He was well loved by all. A memorial service will be held in the church at a future date to be announced.  In lieu of flowers, kindly send any donations to The Mountain Presbyterian Church food pantry. Banister Funeral Home is in charge of the arrangements.

To send flowers to the family in memory of George Robert Lederer, please visit our flower store.
Send a Sympathy Card