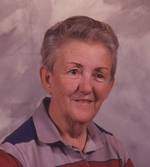 Mrs. Eula Mae Prater Dyer age 89 of Blairsville passed away on September 7th at the Union County Nursing Home. Mrs. Dyer was born October 28, 1919, the daughter of the late Mack Prater and the late Mertie Bryant Prater. She was preceded in death by her husband Newt and brothers Frank and Herman Prater. Eula Mae was a lifelong member of Zion United Methodist Church.

Graveside services were held on September 9th at Zion United Methodist Church and included the singing of many of her favorite hymns by friends and relatives. Interment was in the Zion United Methodist Church Cemetery. In lieu of flowers, please make a contribution to your choice of the following in memory of Eula Mae: Banister Funeral Home of Hiawassee in charge of arrangements.

To send flowers to the family in memory of Eula M Dyer, please visit our flower store.