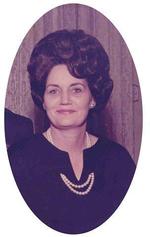 
Edna Ruth Kennedy was born on September 01, 1924 in Atlanta, Georgia where she spent her childhood until the Great Depression hit . In 1932, her family moved to Sparta in south Georgia and her early teens were spent picking cotton, butter beans, and sweet potatoes on the family farm. She was crowned Miss Hancock County in 1940.

In the early 1940's, while working in Augusta, Georgia, she met and married her first husband, Roy F. Wheeler; she lived with his parents in Waco, Georgia until World War II ended. They had three (3) children and were divorced after 22 years . She met and married her second husband, Claude E. McWhorter, in 1969 and lived the next 40 years on their farm in Hiawassee, Georgia.

Edna was an emeritus member of the Order of the Eastern Star Chapter # 305 in Hiawassee and was a past Worthy Matron of that chapter. She became an Eastern Star member in 1953 at Chapter #251 in Ben Hill, a suburb of Atlanta and transferred her membership to the Hiawassee chapter when she moved in the early 1970's. She served as District Grand Deputy for District #1 of the state of Georgia in 1978-1979.

Her career included work as an Interior Decorator for more than 20 years prior to moving to the mountains. She was an accomplished artist, having studied at the Atlanta School of Art under renowned artist, Ben Shute. Her preferred medium was oil painting. Edna was also an avid gardener, rock and gem collector, and cook. Her other hobbies included sewing, crocheting, and an intense interest in current affairs.

To send flowers to the family in memory of Edna R McWhorter, please visit our flower store.