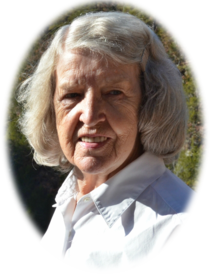 Mrs. Edith Marshall Moreland, age 80, a native and life-long resident of Hiawassee, passed away of cancer Saturday morning, February 22, 2014 surrounded by family at her home. She was born at home in the Woods Grove community on April 19, 1933, the eighth of nine children to Hettie Emerson and William Ernest Marshall.
Edith had no idea of the beautiful life and career that awaited her when she became one of three senior girls to take a nurses aide course following a visit to the high school by Dr. Louis Brady, the first administrator of Towns County Hospital, which was under construction at the time. As a newly-trained aide she worked the night shift when the hospital first opened the following February in 1952, assisting with the delivery of its first baby. Later that June, she began her training at the Piedmont Hospital School of Nursing in Atlanta, made possible by a scholarship obtained with Dr. Bradyâ€™s assistance. Following her graduation in 1955, she returned home to Towns County Hospital as an RN, pursuing a strong feeling that God was leading her here.
Godâ€™s plan was soon fulfilled when Hiawassee native and teacher James I. Moreland asked her to marry him and she replied, â€œI think we can make itâ€. Wasting no time or expense, they got the preacher out of his cornfield to say their vows on October 8, 1955. In the years that followed, she balanced family and career as both a loving wife and mother to two children and as a nurse, serving as the hospitalâ€™s Director of Nurses until she retired in 1994 following 42 years in the field she loved.
She did not slow down in retirement though and remained active, even building a house together with husband James who says, â€œShe sure could drive a nailâ€. Edith also enjoyed reading, baking (she was well known for her chocolate pound cake in particular), and playing piano, a skill she taught herself. She was a dedicated member of Lower Hightower Baptist Church, where she often contributed to piano playing duties. Along with her husband and son, she also achieved the highest available amateur radio license, which at the time required an expert level of interpretation for morse code.
She is survived by her husband of 58 years James I. Moreland; daughter and son-in-law Jimmie and Randy Gose and grandchildren Kelli, Tyler, Morgan, and Conner, of Porterdale, GA; son and daughter-in-law Joe and Michelle Moreland of Woodstock, GA; brother and sister-in-law Ralph and Elizabeth Marshall of Young Harris. She will also be greatly missed by her brothers- and sisters-in-law, who considered her as a sister, as well as many nieces and nephews.
Funeral services were held on Monday, February 24, 2014 at 2:00 PM at Lower Hightower Baptist Church with Pastor Jason Cantrell officiating. Edith was eulogized by Reverend Danny Burch, and specially selected music was presented by Lower Hightower Baptist Church and Cheerful Sounds. Interment followed in the church cemetery. The family received friends at Banister Funeral Home of Hiawassee on Sunday, February 23, 2014, from 6 until 8 pm. Banister Funeral Home of Hiawassee in charge of arrangements.

To send flowers to the family in memory of Edith Moreland, please visit our flower store.
Send a Sympathy Card