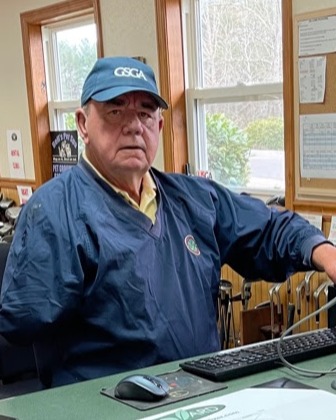 Mr. Dewey Purcell Easley III passed away on Sunday, January 22, 2023 at his home in Hiawassee, Georgia. He was born to the late Dewey and Billie Jo (Ward) Easley in Defuniak Springs, Florida on March 4, 1949. He was a graduate of Lakeland High School, Class of 1967 where he was a standout athlete. Dewey served his country in the United States Navy as a Communications Specialist, was an active member of the local VFW and a member of the Southern Amputee Golf Association. He loved to cruise, play golf and read in his free time. Dewey was outgoing and a little feisty. He never met a stranger and could strike up a conversation with anyone. He was locally "famous" at Chatuge Shores Golf Course as the One Armed Man with the One Eyed Dog where his dog Lightnin' was his constant companion.
Dewey leaves behind his wife, Jeanette Quinn Easley; daughter, Robin L. Easley (Joey Nix); son and daughter-in-law, Keeton R. and Carrie M. Easley; step son and daughter-in-law, Matt and Laura Berry; brothers, Donald Easley and Thomas Easley; sister, Pamela Easley; grandchildren, Emma C. Delaney G. and Hunter Easley; along with a host of nieces, nephews and extended family and friends.
There will be a Celebration of Life Ceremony at Chatuge Shores Golf Course on Saturday, January 28, 2023 from 2:00pm-4:00pm.  All are welcome.
In lieu of flowers, the family is requesting donations be made to the below organizations:
Southern Amputee Golf Association
4105 River Links Drive
Springhill, TN 37174
VFW Post 7808
P.O. Boxx 927
Hiawassee, GA 30546
To send flowers to the family in memory of Dewey Purcell Easley III, please visit our flower store.