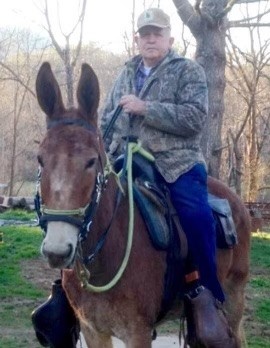 Daniel Wayde Nicholson, age 82, of Hiawassee, Georgia passed away peacefully at his home Saturday, March 20, 2021 with his family at his side. Wayde born on July 15, 1938 in Hiawassee, Georgia to the late Mr. and Mrs. Leonard and Bertha (Underwood) Nicholson. He was one of seven children. Wayde was an avid hunter of all game and loved working mules. He worked for Ford Motor Company for 30 years, when he retired he moved back to the mountains as quickly as he could, he simply loved the mountains he called home. Although retired once, he went to work for the Towns County Water Authority and then the Court House mostly to socialize but he took the appearance at the Courthouse very serious. Wayde was a prime example of love, whether as a husband, father or friend. He was respectable and accountable. He is preceded in death by all six of his siblings and his above mentioned parents. He leaves behind his beloved wife of 64 years Mrs. Jewell Taylor Nicholson; son, Charles Nicholson; son and daughter-in-law, James and Denise Nicholson; grandchildren, Kelley and Jamie McClure, Rheanna and Cory Ingram, Daniel and Heather Nicholson; eight great-grandchildren and a host of extended family and friends.

Banister-Cooper Funeral Home is honored to care for Mr. Nicholson.

To send flowers to the family in memory of Daniel Wayde Nicholson, please visit our flower store.