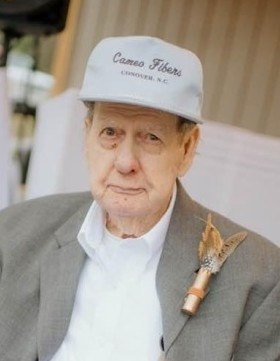 Mr. Curtis Lee Dearing, age 89, of Hiawassee, Georgia passed away Friday, February 12, 2021. Curtis was born on December 29, 1931 to the late Mr. and Mrs. John Thomas and Ammie (Worthy) Dearing in Sand Hill Alabama. Curtis was a member of Victory Baptist Church in Palmetto Georgia and served his country while stationed in Germany in the US Army. Curtis was a devout family man, often repeating "I love my family” or “I am blessed to have my family". To his family, he was everyones "Papaw". He enjoyed being with his family, cooking out or simply just having family stop in and visit. His family was a comfort to him and he was a comfort to his family. He was a hard worker, devoted to his wife and children and a doting grandfather. Curtis enjoyed fishing, watching sports such as NASCAR and Bulldog football on television, and loved tending to his garden when he had one. Curtis is the last of fourteen children, outliving all of his siblings. He leaves behind his bride of sixty-six years, Mrs. Della Mae (Youngblood) Dearing; sons and daughters-in-law, Tony and Mary Dearing, Terry and Tammy Dearing, and Barry and Sarah Dearing; grandchildren, Shane Dearing, Monica Thomas, Chad Dearing, Corey Dearing, Colt Dearing, Brooke Bartosz, Lexi Turner and Shelby Turner; fourteen great-grandchildren and three great-great grandchildren; along with a whole host of nieces, nephews, family and friends.
A celebration of Curtis’s life will be held at a later date.

Banister-Cooper Funeral Home is in charge of arrangements for Mr. Dearing.

To send flowers to the family in memory of Curtis Lee Dearing, please visit our flower store.