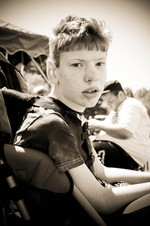 
On December 24, 2012, Cody Michael Wheeler, age 14 completed his journey home to Christ. Cody Michael was born on March 14, 1998 in Marietta, GA. Cody was born with â€œSpecial Needsâ€. He never spoke a word, however, he had tons to say. He touched the hearts of everyone he met. He spoke to others in the happiness he shared with his smiles. Cody Michael attended Towns County School in the Special Education Department. He also participated in Special Olympics every year. Cody Michael has been a resident of Towns County since 2002.
Cody Michael Wheeler is survived by his mother and step-father, Amanda and James Dickert; his Father and Step-mother, Michael and Denice Wheeler; his brother, Chet Wheeler; his sister, Mackenzie Wheeler; his half-sisters, Savanna and Leigha Wheeler; grandparents Kathleen Parker, Lloyd Cruz, Rick and Angela Nakutis; many aunts and uncles, Darrell and Regina Whitt; Brian and Jo Whitt, Angela Faith, Shane and Sandy Arthur, Ricky Nakutis, Scott and Christina Wheeler; several cousins including Austin Whitman, Victoria Faith, Keith Standridge, Alicia Whitt, Cody Whitt, Brianna Whitt, Joshua Whitt, Ashley Kirkland, Alicia Kirkland, and many, many more.
A celebration of Cody Michaelâ€™s life will be held at McConnell Memorial Baptist Church in Hiawassee, GA on January 05, 2013 at 2:00PM. Everyone is welcomed to join the family.
In lieu of flowers, the family is asking that donations and contributions be made directly to Banister Funeral Home, P.O. Box 70, Hiawassee, GA in Cody Michael Wheelerâ€™s name to offset funeral expenses.
Thank you all for your prayers and support. May God Bless You All.

To send flowers to the family in memory of Cody Michael Wheeler, please visit our flower store.
Send a Sympathy Card