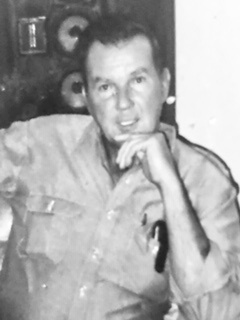 Cleo Leon Smith, age 81, of Hiawassee, Georgia passed away peacefully Thursday evening July 16, 2020 after an extended illness. His wife and two dogs were by his side during this time as he wished them to be.
Cleo was born on April 20, 1939 to the late Mr. Mallie Smith and the late Mrs. Nettie Tyson Smith in Jacksonville Florida.
Cleo was a Veteran and served his country proudly in the Army National guard of the United States of America.
He enjoyed Fishing, woodwork, welding, leather crafting, restoring old cars and trucks and simply anything he could work on with his hands. He enjoyed most of his time at home with his wife and dogs. He was a man of all trades. He was loved by many!
Mr. Smith is preceded in death by son, Mike Smith; brothers and sisters, Ruby Smith Sanford, Dorothy Smith James, Ann Smith Fox, Eugene Smith and Larry Smith.
He his survived by his loving wife Deborah Smith; daughter, Lisa Smith; sons, Steve Smith, James Maxwell, and Lee Maxwell; brothers, Donnie Smith, Floyd Smith, Bobby Smith, and Russell Smith. Step son Robert Edwin Jones and grandson Robert Jacob Jones. Along with an extended number of grandchildren, great grandchildren, nieces, nephews, family and friends.
Cleo will be celebrated and laid to rest in Jacksonville Florida between his mother and fathers burial sites at a later date.

Banister-Cooper Funeral Home is in charge of the arrangements for Mr. Cleo Smith

To send flowers to the family in memory of Cleo Leon Smith, please visit our flower store.