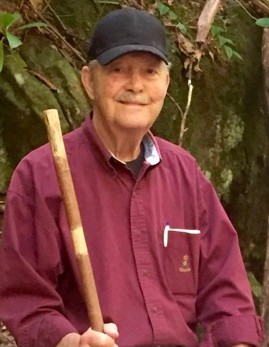 Cecil C. Sanders “JR” age 88 of Hiawassee, Georgia, passed away peacefully in his home surrounded by his loving family on September 22, 2019, following an extended illness.

Funeral services will be held Wednesday September 25, 2019, at Macedonia Baptist Church at 2:00 PM. Internment will follow in the Macedonia Cemetery with military honors.

Flowers are accepted, or if you wish, the family requests that donations be made to Macedonia Cemetery Fund. Banister Funeral Home of Hiawassee is in charge of the arrangements. Thank you to the Homestead Hospice staff and VA services.

JR was born February 6, 1931, to Margaret (Ada) Stroud and Cecil Charlie Sanders in Hiawassee, Georgia. He along with his nine siblings were raised at the family farm on Bugscuffle Road.

At 17, JR joined the United States Marine Corps and served for four years, two of which were spent in the Korean War, including the assault and seizure at Inchion, Seoul, Wonsan, and Hungnam, as well as the “Frozen Chosen” Chosin Reservoir Campaign.

After the Korean War JR also served as lead cook with the Merchant Marines on the Great Lakes. He went on to become a truck driver, retiring from the Teamsters Union in the early 80's.

He was a man of integrity, loyal and faithful to his Lord and family. He witnessed God’s love to many while handing out tracks and giving his testimony to any who would listen. Romans 1:16 and John 3:16 were two of his favorites verses.

JR loved his family with all of his heart and his friends as well. His love for the outdoors and God’s beautiful creation was insatiable. He enjoyed traveling to Colorado, Wyoming, Alaska and Canada, as well as hiking the Appalachian Mountains, taking fishing trips with his brothers and friends, and camping with his grandsons. He was perfectly content being camp cook, serving up delicacies only his grandsons could appreciate.

In his later years he enjoyed sitting on his back porch surveying the view of the Appalachian and Blue Ridge Mountains and reminiscing about the trails he walked and the people who homesteaded the area.


MEMORIES BY JR's GRANDCHILDREN
“One week long camping trip to Sandy Bottoms, the mornings eggs and sausage weren’t completely eaten, so it was saved and combined with that evenings chili. We were unable to finish off the chili, so it was then combined with next days lunch consisting of fried potatoes, fried squash and hot dogs. Over the week the pot grew with every unfinished meal including fish, cabbage and more. We ended up with a concoction of left-overs that was so bad that we noticed Granddeddy wasn’t eating it, but guess who had to!? The lesson was learned: eat everything on your plate and don’t waste food.” -Ethan

“Before meals Granddeddy always prayed the same prayer. It wasn’t repetitious, but with conviction and purely from the heart. It would start with ‘Lord Jesus and end with ‘and help those who are needy around the world, especially little children who are hungry...’ When I was in my teen years I finally understood how the things Granddeddy saw in post-WWII Italy, as well as in the Korean War had weighed heavy on his heart without subsiding. He had a heart for those in need.” -Cecil

Without a second thought he jumped into his RV, along with Nanie, to make it to my wedding in Alaska with three weeks notice. Being his only granddaughter, we shared many special memories over the years. I've always admired the love and pride he had in God, his country and his family. Never once did we depart without him taking my hand and saying that he loved me, I'm beautiful and that he was so proud of me.   -Katie

“Sitting with Grandad on the porch or “the south side” as he would call it, looking at the mountains. For hours we’d admire God’s creation and talk. He explained that life is just like the mountains, it too has peaks and valleys. He’d always say if you trust in the Lord, love your family and be a man of integrity (his favorite word) you’ll never find yourself in a valley for long. Those words of wisdom are what I try to live by each and everyday.” -Jonathan

Two memories of granddad stand out in my mind. Once he said, “I never met a person I couldn’t have a friendly conversation with.” Another memory is from a time when sitting with him and he asked me, “What is the most important word in the dictionary?” I responded with, “Love, liberty … ?” among others. Grandad agreed those were important words, but in his opinion the most important word was integrity. Integrity and friendliness describe the way he lived. Grandad loved to share his knowledge as well as impart wisdom. I’ll always appreciate those times. -Adam

To send flowers to the family in memory of Cecil C Sanders Jr., please visit our flower store.