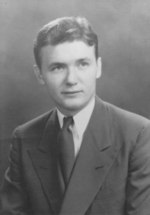 Calvin Gibbs Lane, age 88 passed away on Wednesday,  July 11, 2012, at this home in Hiawassee, GA He was the son of Luther Ford Lane and Maude (Johnson) Lane and was born in Claxton, GA, on June 28, 1924. He grew up in Savannah, GA, where he attended Savannah High School before joining the Army in February 1942. His battery of the 433rd Antiaircraft Artillery Battalion fought in North Africa with the First Armored Division under General Patton and then in Italy with the Fifth Army General Mark Clark. He fought in the Campaigns of French Moroco, Tunisa, Sicily, Naples, Cassino, Anzio, Rome, Southern France and Germany. Calvin always said that the four months he was trapped on the beach of Anzio were the most difficult of all his war experiences. After his discharge in June of 1945, he returned to Savannah where he met and married his wife of 66 years, Ruth Harrison Lane. He graduated from the University of Georgia in 1950 with a degree in Business Administration. After college, he worked with the Internal Revenue Service until his retirement as a Group Director in 1975. After retirement, he and Ruth traveled constantly around the country pursuing their interest in genealogy. Their family will be forever grateful for the legacy of charts, letters, photos and other memorabilia they left behind, as well as for the dozens of tombstones they placed on the graves of ancestors who had been buried without one. Calvinâ€™s beloved Ruth passed away November of 2011. He was also preceded in death by his sister, Miriam Russell, and his brother, L.F. Lane, Jr. He is survived by his daughter, Linda Lane Watson, and his son, Calvin Gerald (Jerry) Lane; four grandchildren, Collin H. Lane, Lauren K. Lane, Lane Watson Briscoe, and Lance C. Watson; step-grandson, M. Grainger Shelley; and six great grandchildren. He was a member of Hiawassee United Methodist Church, the Towns County Lions Club, Georgia Salzburger Society, and numerous genealogical organizations. Memorials may be made to Huxford Genealogical Society, P.O. Box 595, Homerville, GA 31634, or to Regency Hospice, P.O. Box 494, Hiawassee, GA 30546.  There will be a private family service in Savannah, GA at a later date. Banister Funeral Home of Hiawassee in charge of arrangements.

To send flowers to the family in memory of Calvin Gibbs Lane, please visit our flower store.
Send a Sympathy Card