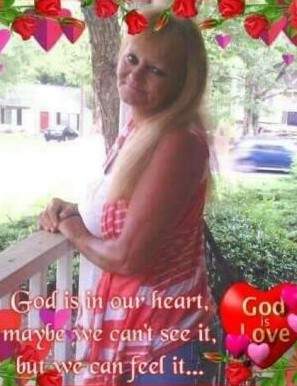 Betty Gail Sisum, age 58, of Young Harris passed away Saturday, February 20, 2021. Gail was born to the late Harve and Betty (Maney) Lance September 26, 1962 in Young Harris, Georgia. She is preceded in death by her above mentioned parents and her daughter, Cassey Carter. She is survived in death by her spouse, Greg Carter; sons and daughters-in-law Randall and Leah Johnson, Bobby and Candice Johnson; step-daughters, Misty Carter, Casey Guerro; step-son, Sheldon Carter; grandchildren, Mikie Johnson, Channon Johnson, Cody Shifflet, Ilah Shifflet, Jessica Shifflet, Willow Padgett; great-grandchildren, Bryson Guerro, Josslyn Guerro, Brayden Shifflet, Jackson Shifflet, Sadie Shifflet, Nova Stainback and many nieces, nephews, extended family and friends. Brother & Sisters – Junior Maney in Elijay Ga. Clifford Maney of Talking Rock. Joy Lance, & Roberta Long of Hayesville NC, Edith Henson of, Murphy , Louise Lance-Givens, Sally Lance Phillips, Myrtle Lance Adams, Hoschton, Ga,. Harve Lance Jr. of Jefferson, Ga. Passed siblings- David Lance, James Lance, Bessie Lance, Lillie Malinda Lance Casey, Dan Lance, Kenneth Lance, Garnett Lance, Robert Shuler, Tish Lance. Gail was a wonderful woman! Her sons described her as the greatest woman that ever lived! She loved her children, grandchildren, great grandchildren, and her dog Tippy more than anything in the world. She was the world’s greatest biscuit maker and she loved to make them for anyone and everyone. Gail could sew just about anything if given a needle and thread. She worked at multiple sewing plants. She loved to be with her family and being outside. Gail would always say that her boys Randy and Bobby made her the most proud, they were definitely her greatest achievement in life. Gail will definitely be missed but we will all see her again one day.
The family is hosting a celebration of Gail's life; please reach out to one of the following family members, Bobby Johnson 470-658-0009 or Randy Johnson 770-896-6025 for information.
Banister-Cooper is in charge of arrangements for Mrs. Sisum.

To send flowers to the family in memory of Betty Gail Sisum, please visit our flower store.