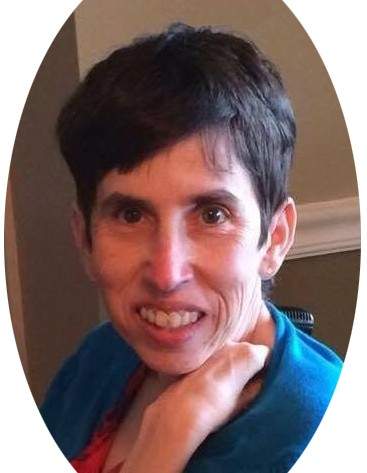 Amy Joyce King, age 51 of Albany, Georgia, passed peacefully into the arms of Jesus at her mother’s home in Hiawassee, GA on May 31, 2016. Amy is the daughter of Jimmy King of Brinson, GA and Zadie King Peters of Hiawassee, GA. She was born September 29, 1964 in Alexander City, AL and moved with her family to their hometown of Brinson at the age of 8, where she grew up happily attending Brinson Baptist Church, Oaks Academy, and then completing Bainbridge High School in 1983. Although she had special needs, she led a full and active life and was loved by all who met her. She began her semi-independent life in a loving group home and worked at Decatur/Seminole Training Center in Bainbridge, GA for many years. Subsequently, she moved to Albany, GA into her own apartment under the guidance of Albany Advocacy Resource Center (ARC), where she thrived. In 2007 she was so excited to begin sharing an apartment with her brother, Alan, which continued until her health recently declined, and was currently in the process of moving to Hiawassee with her mother.
Amy was known for her sweet smile and spirit, had an uncanny memory, and a tremendous love of music, with the ability to sing the lyrics and recall every song and artist she had ever heard. She loved everyone unconditionally. Her other interests included horseback-riding, puzzles and crafts. She never met a stranger, could talk for hours, and enjoyed sharing her opinions and advice. To all who knew her, Amy was an angel both here on Earth, and now in Heaven.
Surviving Amy is her loving mother Zadie Peters, father Jimmy King and wife Janelle, sister and brother-in-law Lee Ann (King) and David Porter of Bainbridge, brother Alan King of Albany, close stepbrother and stepsister Bill Peters of Tampa and Valarie Peters of Tallahassee, three longtime devoted caregivers Cashanka Williams, Mary Williams and Sunset Williams of Albany. She is also survived by a niece, nephew, and many aunts, uncles and cousins.
Amy is predeceased by her two grandmothers, Annie Lee Baggerly and Mary King of Brinson, and her stepfather, BJ Peters of Hiawassee.
Memorial services were held on Saturday, June 4, 2016 at 11:00 AM from the Brinson Baptist Church in Brinson, Georgia. In lieu of flowers, memorial contributions may be made to Albany ARC, PO Box 71026, Albany, GA 31708. Banister Funeral Home of Hiawassee, Georgia in charge of arrangements.

To send flowers to the family in memory of Amy Joyce King, please visit our flower store.