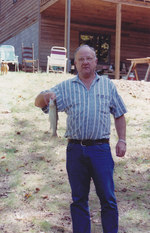 To send flowers to the family in memory of Alfred "A.L." Lewis Eller, Jr., please visit our flower store.